Most homeowners are used to simply living with the shower that was in the home when they first moved in, quirks and all. Unless they’re planning a total gut job bathroom remodel, most take for granted that a shower can be replaced. But you don’t have to settle for a “quirky” shower that isn’t serving you the way it should.

Simply put, you don’t have to settle for that old, outdated shower. But, the truth is most homeowners simply don’t know when it’s time to replace their shower. That’s why Bathroom Pros has you covered with this guide to answer the question:

How Often Should I Replace My Shower?

Your shower is one of the staples of your bathroom and one of the longest-lasting features. While you might need to replace the shower curtain every six months or the bath mat every couple of years, your shower can last for years. However, it won’t last forever.

Most professionals recommend updating your bathroom every 7-10 years, especially if you plan to make it a permanent family home. This may not always involve replacing the shower, but it’s a good idea to assess whether the shower needs to be replaced after about 10-15 years. Of course, every home is different, and every shower differs, so one number might not work for all.

Factors That Impact the Lifespan Of Your Shower

Signs That Your Shower Needs To Be Replaced

So if the lifespan of your shower depends on the individual shower, the best way to know when you should replace your shower is to look for the signs. If your shower has begun to fall into disrepair, it will be a gradual process, and you will have plenty of warning to give you time to replace your shower. You might notice some of these issues:

If you’ve noticed these issues with your shower, it’s a good idea to call a bathroom remodeling professional and begin working towards a shower replacement.

What To Watch Out For With Shower Replacements

In some cases, bathroom remodeling companies will offer to save you the trouble of a “messy shower replacement” by simply taking out your old shower and replacing it with a flimsy liner system. It’s a faster project, certainly, but it’s also like putting a bandaid on a larger issue. If there’s leaking or water damage underneath the shower, this simple fix won’t address that. It also won’t last as long, so you’ll simply have to replace it again in a few years. It’s better to opt for a full-service shower replacement that replaces the entire system, as well as looking underneath.

Another thing to watch out for is the shower material. As we stated above, the material with which the shower is made will impact the longevity of the shower. Acrylic showers are famous for being low maintenance and long-lasting, but do your research on the acrylic you choose. Some acrylic showers are too thin, leading to cracking, flexing, warping, and bending. It’s for this reason that our showers at Bathroom Pros are made with double-thick acrylic, built to last.

The warranty on the shower will also help to give you an idea of how long manufacturers expect it to last, so make sure to give that a look before you make your decision, as well.

Need to replace your shower? Not sure whether it’s time yet or not? Bathroom Pros can help! Contact us today to learn more about our shower replacements or to schedule your own. 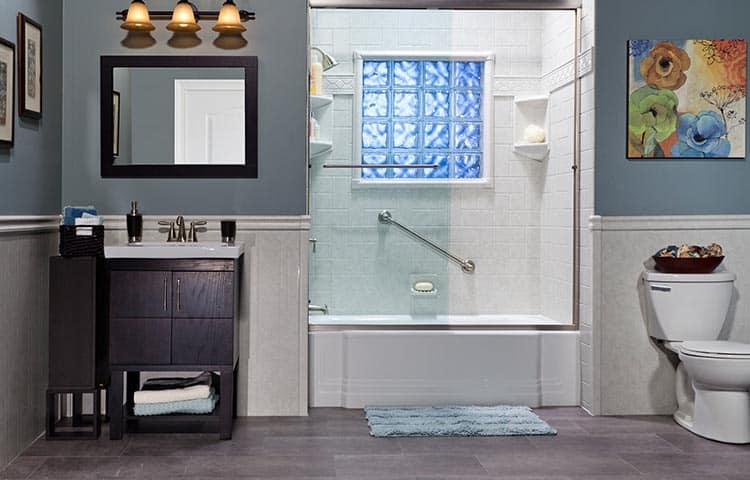 Get a Quote
TODAY

Leave Us a
REVIEW

How To Choose The Right Vanity For Your Bathroom Remodel

We’ll build your dream bathroom with the highest possible quality… in as little as one day!

Our customers rate us 5 out of 5 on Google, and more.

Start to finish, you’re in for a pleasant experience.

Begin your perfect bathroom remodel by scheduling a free consultation: